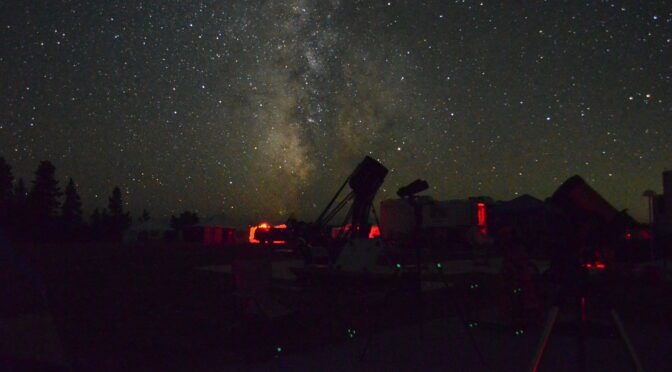 Greetings from you OSP Director Team,

This is our second off-season update on the status of OSP 2021.  Like our January update, we remain optimistic that OSP 2021 will indeed happen.  We are working through some setbacks and contingencies, but we remain very optimistic that we will have a star party during the August 3rd – 8th time frame at the Ochoco National Forest Indian Trail Spring venue.

We are optimistic that we will be able to work within Oregon State and USFS group assembly requirements for an outdoor event such as a star party, and we are optimistic that the public health trends will continue in the favorable manner we’ve seen in recent couple of months.  We recognize that people are itching to get out and enjoy the night sky in dark skies and we are working diligently to make that happen for OSP 2021.

That said, we are dealing with difficult times and we are working to overcome some setbacks in our planning, and we need your help to help us make some event decisions.  In the next week or so we will be sending out a survey to all OSP attendees from 2017-2019 asking for your opinion on the many activities and services that have been offered at recent OSPs.  The survey results will help us make adjustments IF NEEDED to ensure OSP 2021 is a fun and viable event.

Please look for this survey and respond as quickly as possible.  Your opinion matters!

Thanks, and clear skies,

Early registration for Oregon Star Party 2021 is tentatively scheduled for late May. We will update this page as we come closer to registration day. Upon registration opening time we will publish the registration link on the OSP home page. Stay tuned!

It may not be surprising, but the Oregon Star Party would not be possible without the incredible effort of our volunteers. Every year, OSP comes and ends with a resounding success. And every year, a small battalion composed of committee members and other volunteers generously give their time to prepare for our special week of star gazing at Indian Trail Springs. It takes an unbelievable amount of time and effort! When we arrive on site, our attendee volunteers fast get busy preparing and setting up those services that make OSP so successful. We need your help!

The Oregon Star Party committee is calling upon any of those who are attending to volunteer for OSP 2021. Help us make this years Oregon Star Party a success! We have a number of unfilled volunteer slots. Most volunteer slots are for two hour shifts with some longer. None are difficult. We would like to see as many of these positions filled as possible before the star party begins in late July.

If you plan to arrive early or stay later, we want to hear from you! We will need help marking tent locations, setting up signs, tables, and chairs, as well as stocking some of our operational tents. If you will be staying until the last day or perhaps later, we will again need help tearing things down, stocking trailers, and preparing them to take back home.  During the star party there are many essential positions, easy work, that include Registration Tent help, ticket takers, greeters, parking monitors, telescope mentors, and floater positions (fulfilling a task when needed.)

In return for your help, each volunteer will receive an additional prize raffle ticket and one Caldwell Buck (discount coupon for food, drink, etc.) for each shift worked.

In addition to all of the aforementioned perks, each volunteer will get a complimentary OSP-customized water bottle! Photos to come. This bottle features an insulated design to keep your hydro cool in the high desert sun. Gone are the days of hot hydration; volunteer with OSP today!

You can read a description of each volunteer position on our volunteer page: https://oregonstarparty.org/welcome/volunteers/

If you have any questions regarding any of the volunteer positions please contact our volunteer coordinator, Dana Gehm, at volunteers@oregonstarparty.org.

We are looking forward to meeting each and every one of you at OSP 2021! Drop by the Information Tent and say hello.

From the Director Team

The 2022 Oregon Star Party has been cancelled.